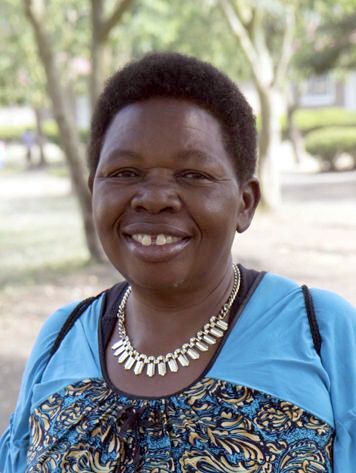 Dorothy Nzirambi Komusana is NOTDEC Uganda's founder and a member of the management team.  She still very much enjoys looking after babies and young children, and also devotes a lot of time to training house-mothers or helping with the routine day-to-day practicalities of running an orphanage.

Dorothy's schooling ended at Primary 6 (her father was ill and could not afford the fees); and, as a result, her written English is limited.  This, coupled with her evident love of nursing babies, and her lower profile in the management team might lead some Europeans to underestimate her. This would be a serious mistake.

Particularly in difficult times, her strength of character stands out, and no-one can doubt her determination to fight for the children that God has put on her heart.  In early 2015, for example, the orphanage was completely full and took the difficult decision to close to all new admissions until further notice. Despite this, people continued to arrive with babies they clearly could not feed or care for. Admitting the babies would open the floodgates — and they really couldn't cope with any more.  But send them away, and memories of 2012 said that they would almost certainly die. What could be done?

Dorothy was decisive.  To avoid creating precedents at Kabirizi, she decamped to premises in Kasese. There she offered short-term help and infant formula while families made their own arrangements, but — as in Ugandan hospitals — only if a family member stayed to look after the baby.  Where appropriate, she also gave childcare training.  This pragmatic approach has ensured that, so far, no babies have died and all are already being cared for by members of their wider family. [For more, see "Bottles & Basics" in The Baby Boom.]