Sponsor a Child
Get our Newsletter
Donate
30th October 2019 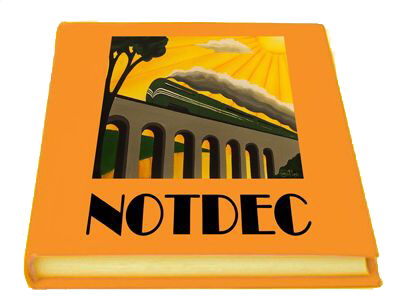 Now back at home, Janet Johnston reflects on the Trustees' visit to NOTDEC in Sept 2019.

Am I suffering withdrawal symptoms?  Home almost a month, I still think about NOTDEC Uganda (NUG) all the time — like a novel I can’t put down.

Yet it ’s all true.  And the story ’s still running!  It could be my diary — if I kept one — though I wouldn’t do it justice.  For that, you ’d need Dickens or somone who wrote about Africa. Then you ’d see what I see, feel what I feel, love what I love — even hate what I hate — and all of it live! 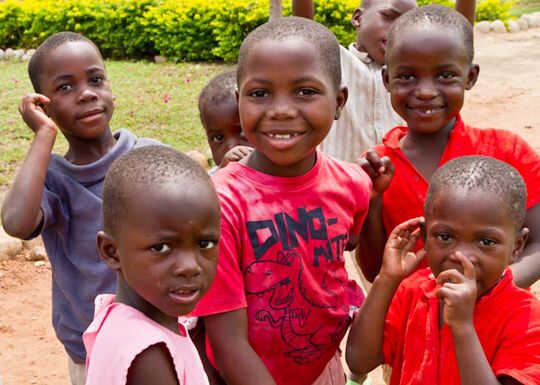 Mamas Dorothy & Milly have retired.  The caring new Director, Moses, has been in post for 2 years .  And he 's learning to juggle — running three operations at once:

Managing NOTDEC is no monologue — all down to one man learning his lines.  It needs to be a conversation.  But how to make that happen?

Against this background, Anthony, Kay & I visited NUG recently, meeting first Canon Jehoshaphat (Chair of NUG Trustees) and then the Trustees themselves.

Canon J was particularly helpful in pointing to opportunities and identifying ways forward.  Many NUG Trustees acknowledged that they were part of the problem.  Individually and as a trust, they needed to redefine their roles — to encourage, guide and support both Director and children.  The sound of pennies dropping could not be sweeter.

For real progress, NUG must harness the full resources not just of Trustees but of its STAFF too.  Woven deep into the fabric of NOTDEC life and growth are some marvellous individuals.

The Hills are Alive with the Sound of … Edson 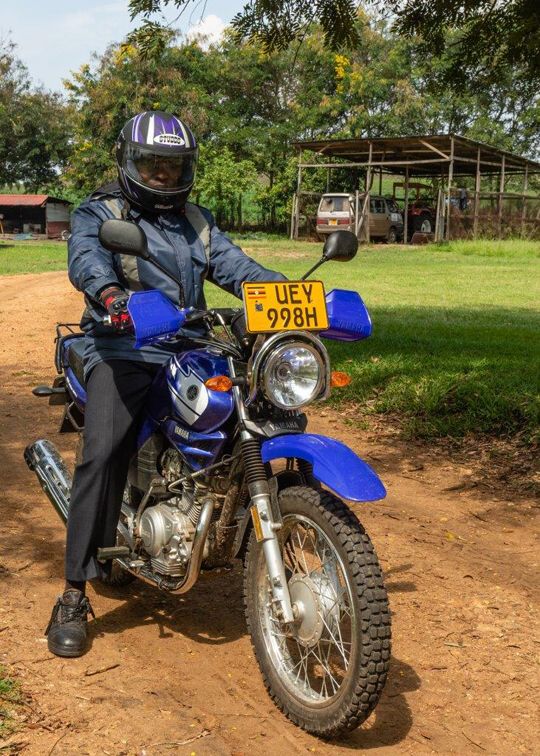 Edson — one of NOTDEC ’s two social workers — is a keen biker.

Edson checks regularly that his charges are happy, well fed, properly cared for, and attending school.  His aim is to visit each one of them both at home and at school.

As some families live in distant districts, that may mean a 5-hour motor-bike journey high into the mountains.

To Edson ’s delight, NOTDEC has just bought a new boda-boda — a Yamaha — which he insists has far more oomph than its predecessor.

In fact, the Yamaha is just 25cc larger: the old one was clapped out by over-use.

But it ’s great that Edson is happy in his work.

He ’s certainly committed to doing the very best for his scattered flock.

Meanwhile, Back at the Ranch 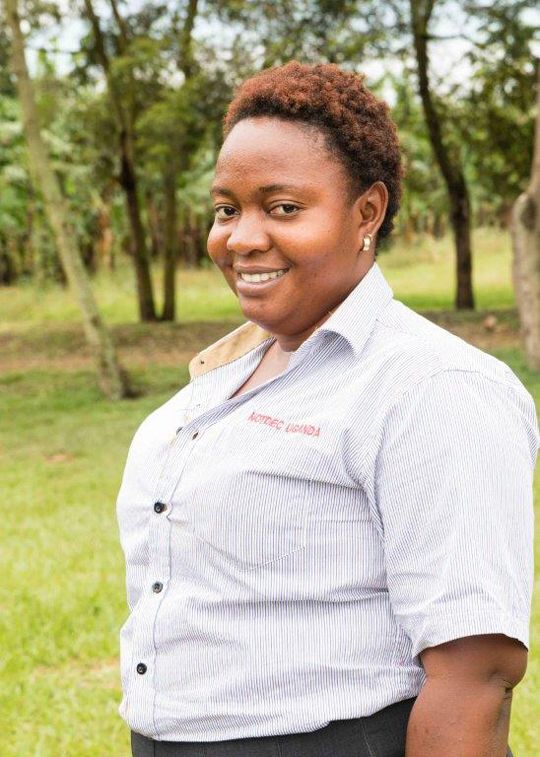 On-site at NOTDEC is Barbra — NUG ’s other social worker.

Barbra does her share of visiting too, but not by bike!

She ’s particularly good with people.  They talk.  Barbra listens.  She listens to housemothers, lumbered with increasing workloads, left largely with babies — now most kids aged 6+ have gone to live with wider family.  So housemothers get on very well with her.

But Barbra ’s not just social skills and gossip.

She has a keen eye for things that aren ’t quite right.  Housemothers, she noticed, were pulled this way and that — torn between running the house for which they are responsible at NOTDEC and caring for one child after another at Kagando hospital.  (Ugandan hospitals don ’t feed or entertain patients: that’s down to family — when there is any.)

If only the children weren’t ill so often …

Well, thanks to Barbra, they ’re not.

Now, the 67 children on-site enjoy a better diet with more eggs, meat and vegetables.  Food costs are up, but hospital and medical bills are much lower.  So the kids are healthier, which is good news for everyone.  And the housemothers aren ’t run ragged!

High fives for Barbra: they’re happier too, with more time to look after the children.

Of course, one social worker doesn’t make a summer.

The full cupboard of life at NOTDEC has not been without its difficulties: the infiltration of false teaching, sloppy time-keeping, erratic purchasing controls, filing problems — even factional divisions amongst the staff. 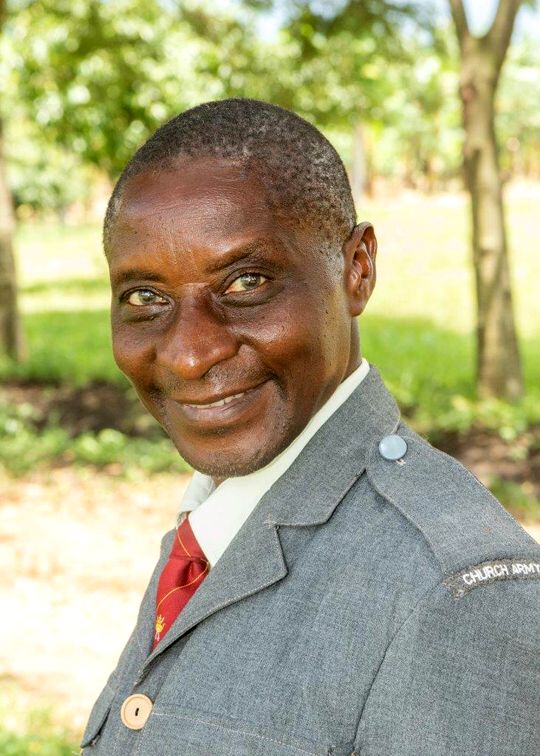 He ’s canny; full of “go” — someone who knows how to achieve his goals, someone people respect. You ’d love him.

Retired, after 20 years as Chaplain and then Estates Manager at Kagando Hospital, he ’s no inconsequential cleric who knows nothing about anything.  He is a man of God, with a strong faith and a love for the Lord.  But he is also very knowledgeable about all aspects of property, maintenance, record-keeping and running an office.

Under Chaplain Ezra, Sunday services are shorter yet have more substance.  He ’s instituted daily devotions too — right at the start of the working day.  And there are also weekly meetings for housemothers.

In the past, thru-the-night prayer meetings led to factional dissent not to mention staff too tired to work properly the next day. Now Ezra runs just one “all night” prayer meeting a month — strictly 7:00pm to midnight on a Friday.  Anyone sleepy the next day is quite likely to snooze in their own time!

Captain Ezra counsels people individually. Thanks to his guidance, Estates Manager Tom now understands his own role.  Control of purchasing is tighter, with better records and accurate filing.

After hours, the pick-up and the new boda-boda are locked away: only Tom and Captain Ezra have keys.  Before they release either, the driver must log the odometer reading, destination, return distance, and the cost of any fuel bought or planned.

Poke a stick in enough puddles and it won ’t always come up clean.

Buzzing around by boda-boda, Edson sees lots of kids happily — or grudgingly — attending school.  Occasionally, he ’ll find a child who ’s bunking off.  Reasons vary — problems at home, boredom, bullying, etc.  Counselling is the best place to start, working towards a plan.  That ’s his job.  Occasionally too, he uncovers appalling living conditions — needing extra bedrooms, or a decent kitchen, a drop toilet or a water collection system — which the family can ’t afford.  A few NOTDEC kids now live in housing so poor that social workers must try to fund appropriate improvements or take them back to NOTDEC.

On rare occasions, Edson ’s stick may rake up something altogether more troubling.

In Uganda, children “belong” to the father; the mother looks after them; and sons inherit.  Especially for a motherless boy, this can mean trouble if the father remarries.  His second wife may resent seeing part of her own sons ’ inheritance “stolen” by a step-son whose long absence at NOTDEC casts him as interloper.  If you ’re on the breadline, you won ’t relish taking food off your own kids to feed an outsider. All too easily you ’re the “wicked step-mother”.  Right now, a few NOTDEC kids are not being properly fed, mainly by step-mothers.  Though action is being taken, it would be unacceptable to identify them here.

Or ponder the plight of kids living with an unmarried aunt.  Girls don ’t share in inheritance, so carers who are maiden or divorced aunts often find themselves and their brother ’s child being turfed out of the family home or charged exorbitant rents to stay.  NOTDEC has two such “aunt sally” carers living in impossible circumstances.

A Tale of Two Sallies 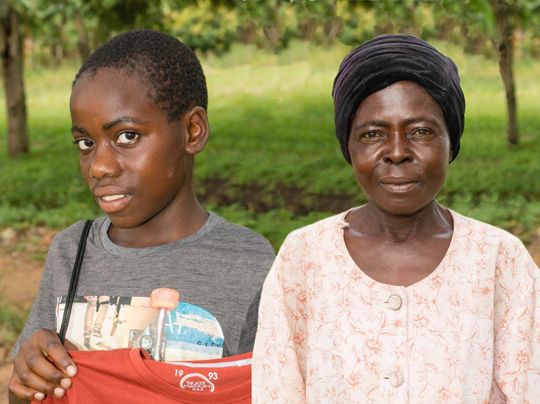 Masika Jane saved Moses ’s life — stopping her step-brother killing his baby son, then breast-feeding the boy even though this led to her divorce.  After time at NOTDEC, Moses was resettled with his aunt and her son Isaac.  He gets on very well with Isaac.

But Masika 's step-brothers (Moses ’s father and his brother) asked her to leave the house. As a woman, she has no property rights; the men — who do — see her and the kids as a burden.  And they want Moses out, so he ’ll have no future property rights.

At her wits end, Masika has put down a £100 deposit (480,000 UGX) on land in a very unsuitable area — but all she could afford.  Moses is currently, boarding at school; Masika & Isaac are squatting with a neighbour.  When term ends, they may all three be squatters.

Moses & Masika Together — in Photoshop at least! 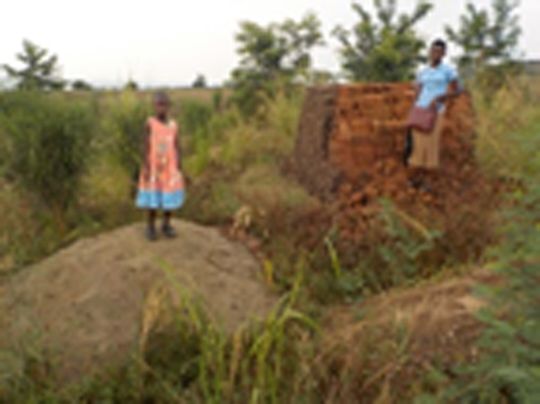 Monica has severe eyesight problems, but she still cares for her niece Ruth.

For 4 years, they lived rent free in 2 rooms of a house owned by Monica ’s uncle (who is also Ruth ’s grandfather).  But then he wanted the house for his sons and gave Monica notice to quit.

Since that expired in August 2019, she ’s been under pressure to go, paying a high rent until they ’re out.

Monica is no fool: she knew she had no security of tenure.

Sadly, she has no magic wand.

How can anyone not need to know what happens next?

As I said at the beginning, I ’m now back home again.

Of course NOTDEC is no novel.  It ’s not just something sensational to read on the train.

It is a matter of life and love — the lives of countless kids and carers, and our love for them and for our God, which compels us to do what we can for them.

Please pray for the children, their carers, and for what happens next.

And thank you for your donations — which help us write at least a few happier endings.