Sponsor a Child
Get our Newsletter
Donate
15th February 2015 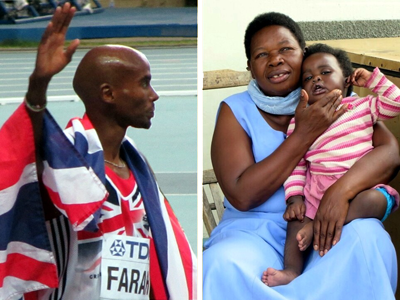 In Moscow in August 2013 I photographed a small African man who ’d just run endlessly round a track amazingly fast. Then Seb Coe put the gold medal round his neck; we sang God Save the Queen; and Mo Farah was a hero.

At NOTDEC this January, I photographed a short, plump African lady with a bad back who has saved the lives of dozens of babies and created a loving home for 120.  Nobody put a medal around her neck; no-one sang her praises or proclaimed her a hero.  But that is the scale of her achievement.

The children that Dorothy believes God has called her to care for have nothing.  Their mothers have died – in childbirth, accident, domestic violence, or from AIDS – and their families can ’t feed or care for them; some were abandoned – unwanted babies.

In rural Uganda, if things happen at all, they happen slowly; unplanned; making-do. Shops may be old shacks, or in recycled containers plonked at the roadside.    Dorothy ’s first orphanage was typical – a chaotic old homestead of a place that has seen better days, in rundown premises in Kisinga.  We went there.

By contrast, NOTDEC is a well-planned “village” of brick-built bungalows, classrooms, an office and a chapel; there ’s a farm for food, a tractor and bowser for fetching water, and a bus to take the kids to school.  It 's not perfect: in the dry season, when we were there, it ’s so dusty that the kids get filthy just playing – something you don ’t see in most photos sent to sponsors!  But in January 2009, it was open fields.  And thereabouts, nothing happens that fast!

Above all, the children are extremely happy, grateful for what they ‘ve been given – far happier and more grateful than I ever am.

But what really astonished me is this: I am playing a small part in making it all happen!

I sponsor Abraham and met him for the first time. Being there made me realise — the cash that I and 100+ other sponsors contribute actually helps Dorothy to do what God has commissioned her to do.  With Milly, the house mothers, and the office staff, we ’re part of Dorothy’s team – the team God has given her.

It ’s like being able to do some of Mo Farah ’s press-ups for him.  Or it would be, if only Mo had devoted his life to something useful – instead of running around in circles!

If you think God gives an easy ride to those doing His work, you should see the X-rays of Dorothy ’s back.  Or take Canon Andrew Dow – retired former vicar of St Paul’ s Leamington Spa – who answered God ’s call to teach at NOTDEC.  Andrew prepared study booklets in uncomplicated English for two courses – a 2-day introduction to St Mark for children, and a 5-day Bible Overview for the oldest children and adults.  He had lots of copies printed and flew out to join us.  But arriving at Entebbe late at night after a long flight is disorienting; and Andrew failed to reclaim his precious box of booklets.  Worse, he didn ’t realise this until the next day after a 7-hour drive to Kasese.

Lots of prayers, and anxious phone calls followed.  To release the box to our driver, the airport wanted a scan of Andrew ’s passport.  And NOTDEC’s internet connection just wasn ’t up to it.  But God changed the airport boss ’s mind: and Andrew ’s box finally arrived with just 2 hours to spare.  The shorter first course could proceed; and the main 5-day Bible Overview should be no problem.

Come 2pm the following Monday, however, and Andrew was alone in the chapel: no one had turned up!  After all the stress of retrieving the study booklets, yet more pressure!  Cue more prayer.

In the Lord ’s good time, NOTDEC ’s 30-seater school bus arrived with 40+passengers from Kagando Hospital.  Then a minibus, a motorbike, NOTDEC ’s older children and staff … and they were queuing to get in.  On Tuesday to Friday, everyone arrived earlier, the chapel was full to overflowing, 150-175 took a soda and biscuit at half time, and we had to buy more Good News Bibles and make extra copies of the study workbook.

Crucially, the Lord blessed Andrew ’s teaching to his hearers.  In a “thank you” letter, NOTDEC children wrote that this “changed our lives … and … gave us an inner and wider understanding of the Bible.”  His efforts were also well received by NOTDEC staff, by staff of Kagando Hospital, by those doing a lay reader ’s course, and by local clergy.  And both NOTDEC and Kagando Hospital have invited him for 2016 to repeat the undoubted highlight of January 2015.