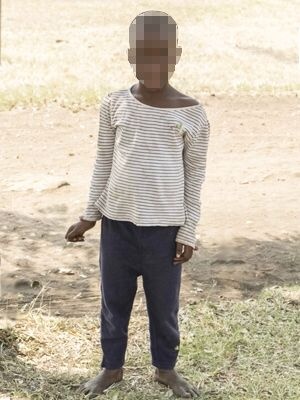 CD’s mother had been ill intermittently for three years and fell sick again during her pregnancy. When she delivered she didn't have enough breast milk, so CD was fed on whatever foods were available — many unsuitable for a young baby. When the mother died, things got even worse.

CD’s father is a soldier.  On his wife's death, he requested leave to look after his daughter.  Then, he left CD in the care of his elder brothers. Eventually, the brothers sought advice from the Probation Officer.  On the advice of the Probation Officer of Bundibugyo district, CD was finally brought to NOTDEC by an unmarried uncle in December 20XX.

The uncle had been looking after her and another girl aged 7. CD was naked and starving – so skeletal, it was hard to tell how old she was.  She had just 4 teeth, and wasn’t even crawling.  It is now thought she must have been 14-15 months old.

At the time of writing, CD is her father's only child.  He has not re-married. CD's paternal grandparents are no longer living.  CD has paternal uncles.  It has proved difficult to find family on the maternal side.

CD comes from a village c200 km from NOTDEC.  Fortunately there is an all-weather road.