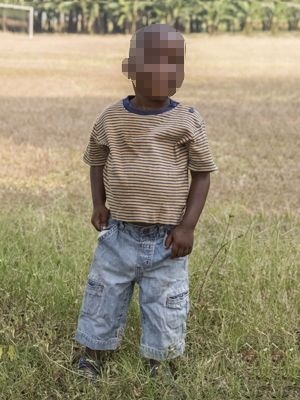 KL arrived at NOTDEC in April 20XX as the result of a family tragedy.  The story initially given to NOTDEC was extremely lurid.  His father had killed both his mother and grandmother.  The mother’s family then destroyed his home, and vowed to kill him if he showed his face again. 2 months old KL had nowhere to live and no-one to look after him.

Later research has revealed a different story that is no less sensational.

Born in Kasese district in February 20XX, KL was his parents’ the second child.  He was indeed brought to NOTDEC in April 20XX after his mother and grandmother had been killed in cold blood on the 27th.  However, the killer was not KL's father but the father's brother LL.

LL had brought in a wife from a distant village.  When, after some time, the wife left him, he blamed his mother and sister-in-law.  Certainly the murders were only a month after the wife left.  LL first killed his own mother; and when his sister-in-law tried to raise the alarm he hit her with an axe and panga, killing her too.  He was later arrested, tried in court, and sentenced to 80 years in prison.

Returning from the burial of a relative in the next village, KL's father was told that his wife and mother had both been killed.  For reasons that are unclear, KL was brought to NOTDEC by neighbours.

KL’s mother's family became very hostile because of the loss of their daughter.  They would not allow her body buried at the husband’s home because the bride price was not yet paid, and forced KL's father's family to sell part of their land to pay both this and a fine for the deaths.

KL's family is poor and his father has remained single and unable to take his first child to school.  He even picked a young girl as wife, but has not managed to pay the bride price.

When these events took place, KL's grandfather was bedridden and unable to rescue the situation.  He died the following January.

More investigation will be needed to find other relatives with whom KL might be able to live when he is older.  So KL's stay at NOTDEC may be a long one — lasting until more information is found about the wider family.