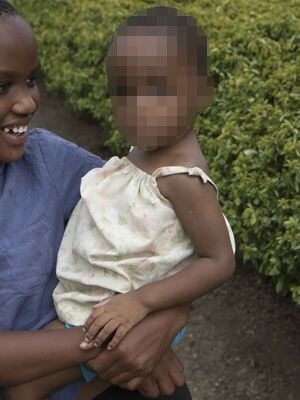 NO was delivered normally at Kilembe Hospital in December 20XX.  After three days, NO's mother was discharged and she gradually resumed her normal activities including ploughing of the garden. She fell sick the following March and was taken to a Health Centre in Kasese town, but was discharged with no improvement. When they reached home they decided to take her to another Health Centre. It was thought that she had resistant malaria but treating that still produced no improvement. The second Health Centre referred her back to Kilembe hospital, and an x–ray there revealed that her spleen was swollen and needed to be removed (an earlier account says a perforated intestine). She was taken to theatre at 10am the following morning and brought back to the ward where she died the following day.

While her mother was ill, NO was fed on soya bean milk. She was brought to NOTDEC on 22nd May in extremely poor shape.  She had marasmus (an extreme from of malnutrition) and the Probation Officer who dealt with her thought she was a only month old.  In fact she was then aged 5 months. Without infant formula, it can be almost impossible for a bereaved father to feed a newborn.