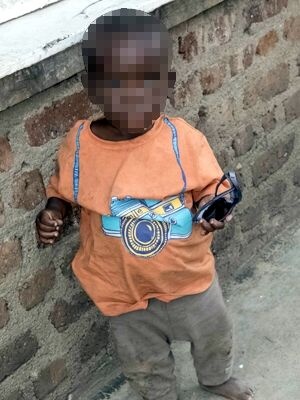 QR was born by caesarean section at Kilimbe Hospital in April 20XX — the family's twelfth child.  His mother died the next day aged 47.  As his sister-in-law was then breastfeeding, she was asked to feed QR too.  She agreed; but, as time went on, QR's health began to deteriorate.  (Or according to the account first given to NOTDEC, QR was initially breastfed by a woman in the village, but this led to disputes between her and her husband.) Either way, QR’s father tried to look after him, but the child became malnourished.  In desperation, he took him to the Child & Family Protection Unit at Kasese Police Station.  They agreed that QR needed expert care and referred him to NOTDEC.

His father arrived in January 20XX with documentation asking NOTDEC to admit the boy, then aged 8 months.  QR was the size of a 4 month old and had orangey hair – a sure sign of malnutrition.

QR's father has since deserted his home.  He tried to sell the land, but his family stopped him. QR is his 11th living child. One is married in Kilembe sub-county. QR's married sister looks after four more; and another three live unsupervised in the family home.  QR is at NOTDEC, and is likely to be there rather more than the target 3 years.