Get close to NOTDEC UK and you'll soon find yourself wondering what is for the best.

The question is particularly acute in relation to sourcing the goods for NOTDEC Uganda. Other things being equal, should we go for the cheapest solution — typically imported goods, often second-hand?  Or should we buy new Ugandan-made goods to help grow the economy?

In 2003, the Ugandan Government proposed to ban imported second hand clothes (mivumba) to stimulate demand for Ugandan-made clothing.  With an effective ban, what had been spent on mivumba would support lots of new textile jobs.  But most Ugandans relied on mivumba.  After widespread protests, the proposal had to be dropped.  So the market remains awash with cheap mivumba, undermining any chance of growing a domestic clothing industry. 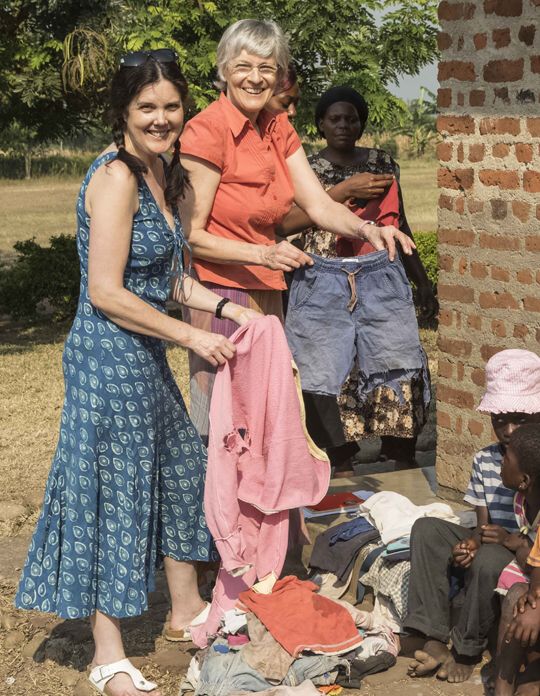 If you're a NOTDEC UK supporter, do you give your unwanted clothes — worn or not — to NOTDEC UK, or to the Oxfam Shop?

Of the clothes donated to them, UK charity shops sell about a third to Sub-Saharan Africa.

Rather than let Oxfam sell  your clothes somewhere in Africa, therefore, you give  them to NOTDEC UK who take them out to Uganda for you. NOTDEC Uganda staff or children receive them free of charge, so may be they're better clothed than they would have been, or perhaps they have some money still to spend.

Good deed done!  But you wouldn't have created any Ugandan clothing jobs.

Only by giving cash might you have created jobs in the local garment industry — and money doesn't grow on trees, so that's far harder than giving unwanted clothes.

And your cash would create Ugandan manufacturing jobs ONLY if NOTDEC Uganda then spent it on new Ugandan-made clothing, not on mivumba or dirt cheap Chinese imports.  And money doesn't grow on trees in Uganda either, so that is extremely unlikely.

In sum, whatever you do, there will be no new jobs.

When we were there in January 2015, NOTDEC Uganda needed two dozen school bags.  The choice was between grubby second-hand European imports and clean new Ugandan-made bags, which Milly & Dorothy said were less well designed, made of inferior materials, with weaker zips, minimal reinforcement, and "wouldn't last 5 minutes".

Off we went to Kasese with bundles of notes and trooped round the likely retailers.  And sure enough, we came away with second-hand bags from Europe.  The only alternative was locally made bags which Milly & Dorothy knew just would not withstand the wear that children give them. 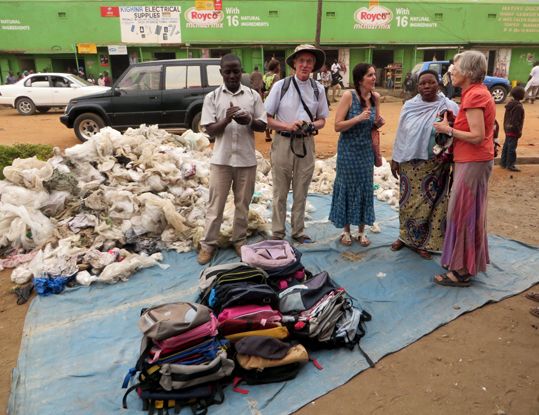 To make sure we did as we were told, despite the scruffier appearance of second hand bags, Dorothy came with us!

John & Carlee Leftley visited local clothes markets in May that year, and John's journal notes show what he saw as sensible buying.

“The average cost ... was 400,000 shillings (... about £90) [for] a bail which weighs 45Kg and contains between 200 and 300 items of clothes.  The clothes in each bail are the same, say boys trousers or baby clothes or bed sheets etc. ... [W]e should look again and see — if NOTDEC [Uganda] bought a bail of clothes and took what they needed, could they easily sell [or] return those items they did not need?

New Ugandan-made clothing wasn't even in the reckoning.

Thirty years ago, most Africans could buy locally-produced new clothes.  Now, most are too poor and have to buy second-hand imports.  When money from NOTDEC UK is spent on clothing, footwear, school bags, bedding etc., again the prudent choice favours imports.  Who would favour local tat when imports — albeit second-hand — are very cheap and clearly better?

But NOTDEC Uganda school-leavers need jobs. And jobs don't grow on trees.  They need money to be spent on new, locally grown or manufactured goods — expenditure which typically does not make short-term economic sense.

Persuading NOTDEC Uganda to buy shoddy locally made school bags, clothes & shoes would make no difference.  The problem is Globalization.  And until the Western economic powers join forces to foster enterprise in Sub-Saharan Africa (as in the Millennium they did to write off Third World debt) nothing is likely to change.

All we can do is to pray that the powers that be will come to see what the young people of Africa really need — what NOTDEC Uganda's young people need too — a growing economy generating worthwhile local jobs.

NOTDEC UK and NOTDEC Uganda are part of a much bigger problem.  But God can solve the big problems too.