Numbers of children at NOTDEC Uganda are rising fast, with a record 14 new babies in 2014.  At that rate, even if all children left at 16 (which they don’t!), the total is set to pass 220.  Yet the orphanage was designed for 100 children living on site.  And it’s already full.

What can we do?

A Tale of Two Crises

Twice in its history NOTDEC Uganda has turned away babies – in 2012 and again in early 2015.

The Worst of Years

The 2012 episode was a tragedy.  Four babies were turned away:  all four died.  Dorothy, who had made the decision very reluctantly, was called a "child murderer", and emotions erupted in a welter of blame, regret, nightmares and anger.  The policy was quickly reversed, unsustainably large numbers of babies were accepted, and NOTDEC Uganda quickly had a dozen unsponsored babies.  Much prayer followed; and, in due course, the Lord provided sponsors for all the new babies.  Both NOTDEC Uganda and NOTDEC UK were left pondering where all this was leading.

In 2015, things were handled differently.  At the outset, the two largest sources of referrals — the Probation Officer and Kasese Child & Family Protection Unit — were formally notified that NOTDEC Uganda would be unable to accept new admissions until further notice.  That immediately reduced the pressure.  But, crucially, anyone still bringing along a baby that they clearly could not care for was not just turned away. 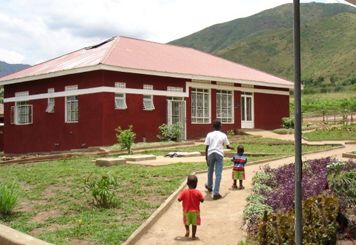 Instead — in an on-going programme devised by Dorothy — they are given short-term help (infant formula powdered milk etc) while they make their own arrangements.  If need be, a nominated family member is given simple training in childcare, nutrition and hygiene — especially how to sterilize a baby's bottle properly.  To reduce NOTDEC Uganda's costs, families able to pay must do so. To remove pressure from the orphanage, this initiative is based at a small unit in Kasese.  And, while babies are staying there, they must be accompanied by a family member (which is the norm in Uganda for hospital care).  The beauty of "bottle & basics" is that, from the outset, it keeps far more babies in the care of their wider families.

Thankfully, "bottle & basics" has also taken the emotion out of the situation.  But there are still far more destitute babies than NOTDEC Uganda can cope with. What is the solution?

Doubling capacity at NOTDEC Uganda is not on.

First, we can’t afford it.  Second, it would make Kabirizi even more of a magnet, pulling still more unwanted babies from as far away as Kilembe and beyond, so forcing further expansion.

Kabirizi is dry: all water has to be hauled in, and pumped up a tower to provide running water.  With more children, we’d need more housing, an even taller water tower, more classrooms, another school bus, more staff, more staff quarters, and a bigger office. Such a major institution cannot sensibly be developed on a site with no water.  Such an “orphan magnet” be unsustainable.  And it would be completely contrary to Government policy — which is to resettle all orphans over school age back with their wider families.

One element of a solution might be for NOTDEC Uganda to have a clearly-defined catchment, and to take children only from that area.  For this to work, other orphanages would also have catchment areas, between them covering the whole district. And, in making referrals, Kasese Child & Family Protection Unit would have to respect those catchments.  Effective de facto  catchments of this kind are already emerging.  But, at present, NOTDEC Uganda is the only agency for miles that will accept tiny and malnourished babies.  For them — right now — catchments wouldn't help.

Because NOTDEC Uganda is currently the only agency which takes tiny babies, there is nowhere else that newborns can be referred.  If they were from outside the catchment and NOTDEC Uganda refused to take them, they might well die.   We could not let this happen and would strive to help in any life-and-death situation.  But, once the emergency is over, NOTDEC Uganda needs some way to pass "out-of-area" babies back to the referring authority and must not be expected to accept ongoing responsibility for their care.  Without some such mechanism, NOTDEC Uganda could be inundated with arrivals from a huge area and might be forced periodically to close even to local admissions.

Nobody wants "on-off" orphanages.  And no-one wants babies to die.  By combining catchment areas, emergency cover, and the development of more "bottle & basics" schemes, we may  have the seeds of a solution. Certainly "bottle & basics" can help keep far more babies with their wider families, potentially reducing the number of "out-of-area" babies for which NOTDEC Uganda has to accept long-term responsibility.

As of today, some of the pieces of the jigsaw are missing or uncertain.

So we keep praying.