Sponsor a Child
Get our Newsletter
Donate
18th March 2020 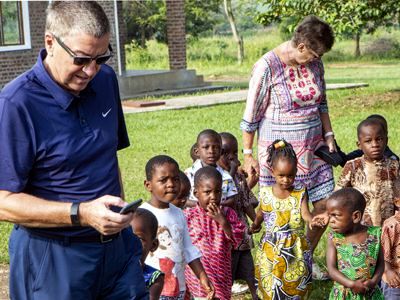 In January 2020, Trustees Janet & Anthony Johnston made their annual pilgrimage to NOTDEC Uganda.  One week later, child sponsors and volunteers Averil & Graham Ballinger flew out to join them – taking three outsized boxes of Christmas presents for the NOTDEC kids.

Though they're very well-travelled, it was Averil & Graham's first trip to Uganda.  This Newsletter draws on their separate reports to see how they found it – being thrown in at the deep end!

“Landing at Entebbe, Uganda, on a hot, sultry evening we were first concerned our three … boxes might not arrive, or our driver might not be there.  We needn’ t have worried: all was well. Next, a nail-biting drive into Kampala!  Some drivers saw no need for headlights.  Scooters abounded, with four people aboard, no crash helmets, some loaded with high, long, or heavy items – sometimes with all three! Should I watch or shut my eyes?  Against the odds, we reached our B&B safely.

A noisy night, then an early call to prayer from the local Mosque and I realised: the window was open!  Breakfast was quick and simple – we’ d arranged for our driver, Godfrey, to collect us at 7.30am for the trek to NOTDEC.

After a long, dusty, hot and bumpy journey we arrived in Kasese with only one puncture en route. We were met by Anthony in a beaten-up vehicle with no suspension and a worn, nearly flat spare.”

Graham describes the 7½ hour drive to Kasese “on roads … good, bad and indifferent”, passing through countless villages and building up a picture of Ugandan life.

“In Kasese we met up with Anthony, who suggested we purchase anything we needed from a small supermarket.  But, with no idea what to expect at our accommodation, we didn’t know what to stock up on.  Anthony then drove us to NOTDEC in a rather beaten up old car with a badly cracked windscreen: … this was a very poor part of Uganda.

At NOTDEC we met Janet and she introduced us to many people; but, barely awake from our travels, we could not remember most of them.

The road from NOTDEC to our accommodation at Kagando Guest House was the worst so far… What had I let myself in for?!

Uganda in a nutshell.  Graham's pictures of Kagando Guest House show its basic bed with mosquito net, and recalcitrant shower!

I was right to be apprehensive. The accommodation resembled an open prison, with very basic bedding, and a shower like an upturned watering can with only intermittent hot water. Dinner was indescribable … barely edible; breakfast was a slice of toast with coffee if they had any. It was not possible to go anywhere, and it was dark by 7pm.

“The road to … Kagando Guest House was potholed and bumpy. Dinner was spaghetti and vegetable “stew”, [or perhaps] plantain and battered fish – all washed down with water – and with pineapple for dessert. Our room was very basic. What was I expecting? A mattress cover would have been nice … a shower that worked, and delivered warm water, and a comfortable chair or two.

Our mornings and evenings fell into a routine of sameness. Meals were regular, but we were not hungry – just bored with the food.

However, we both lost weight and are better for it!” 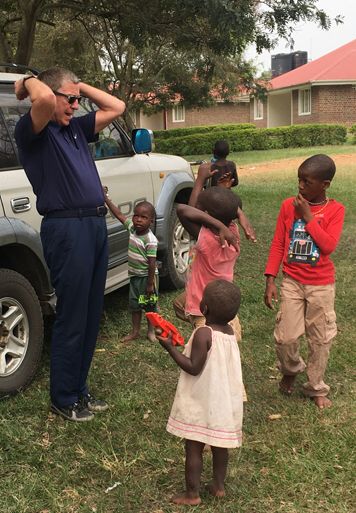 For Graham, the children were

“… an absolute delight.  To break the boredom of my day I would go outside and play with some of them. They readily greeted us on arrival each day and we got them singing a welcome tune based on Happy Birthday to you…"

"Janet and Averil spent … days, distributing sponsors’ Christmas presents to the children and looking after the wellbeing of those on site. "

"The house mothers have a difficult job and do it exceptionally well.  On site, all the children are well cared for, have regular food, schooling and healthcare and have housing and … clean drinking water.”

Averil writes that the children were

“…the real purpose of our trip … Without exception, they are a delight. "

" … All greatly appreciated the Christmas presents we took out.”

“We also visited NOTDEC children now living with their extended families. Seeing their homes is very humbling. They have nothing.  Some homes are brick with tin roofs, others wattle & daub.  Toilets vary in quality!  Some children had had no breakfast, with scant sign of dinner. There is no running water – women and children collect it from a standpipe or the river. Life is tough. Some families are subsistence farmers; others have cash crops too. The women are the family entrepreneurs, selling any surplus produce on market stalls.”

Graham's pictures of Averiil & Janet visiting children living off-site with their family, and also one of another typical local house (not a NOTDEC family). 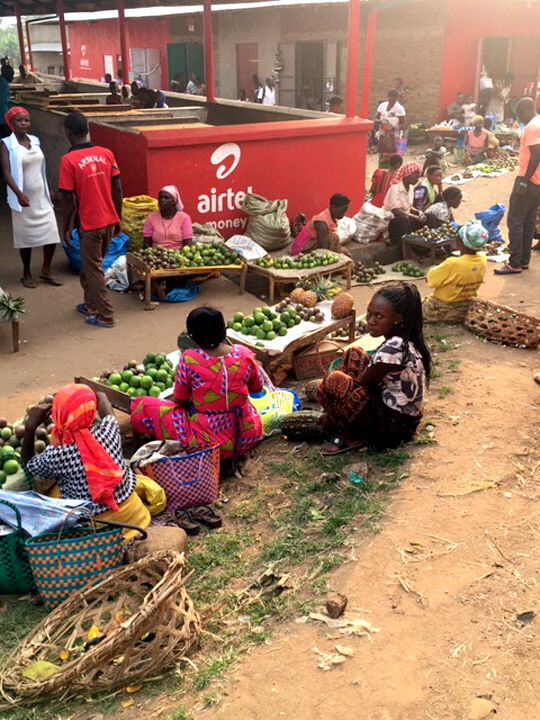 Graham writes that he “… joined one visit to a family off-site… [It] is truly humbling to see how … local Ugandan families live.

Conditions in most of the children’ s extended families are much worse than in the orphanage.  Housing is poor … they often have no food, and the men may well have no work.

[But] … in Ugandan culture, women do most of the work; as a generalisation, the men are lazy”.

Graham saw ...“the purpose of the trip [as] to help at NOTDEC.  Initially I had no idea what I was going to do. Averil and Janet were involved with the children and Anthony had an endless stream of photographs to take, so for the first couple of days I talked to the staff and wandered around the coffee and soya plants gauging what went on.

Anthony had said that financial reporting was weak, so I immersed myself in the office with Annah, the accountant, and spent most of my time developing and installing a monthly financial reporting system. Whether it will be used remains to be seen.”

Since Graham wrote this, Annah has been in touch with detailed questions, and is clearly making very good use of his system.

“We had to focus on what we could achieve and not obsess about [the rest]. There was too much to do to change and improve everything.  Several problems were evident: the lack of a work ethic, the aimlessness of some staff, rats in some houses, the use of plastic bottled water in NOTDEC’s office, and corporal punishment (illegal in Uganda) at some schools.

… NOTDEC’ s long-term future … [must include] a profitable farm. The farm grows coffee, soya, maize and green matoke bananas. The soil is fertile, the sun shines and there is rain. All that is needed is the drive to make the farm pay and staff with the will to work.

The children are well fed and cared for. They are happy and can run free in a safe environment. Life here is better than outside NOTDEC, but there is still much to do.” 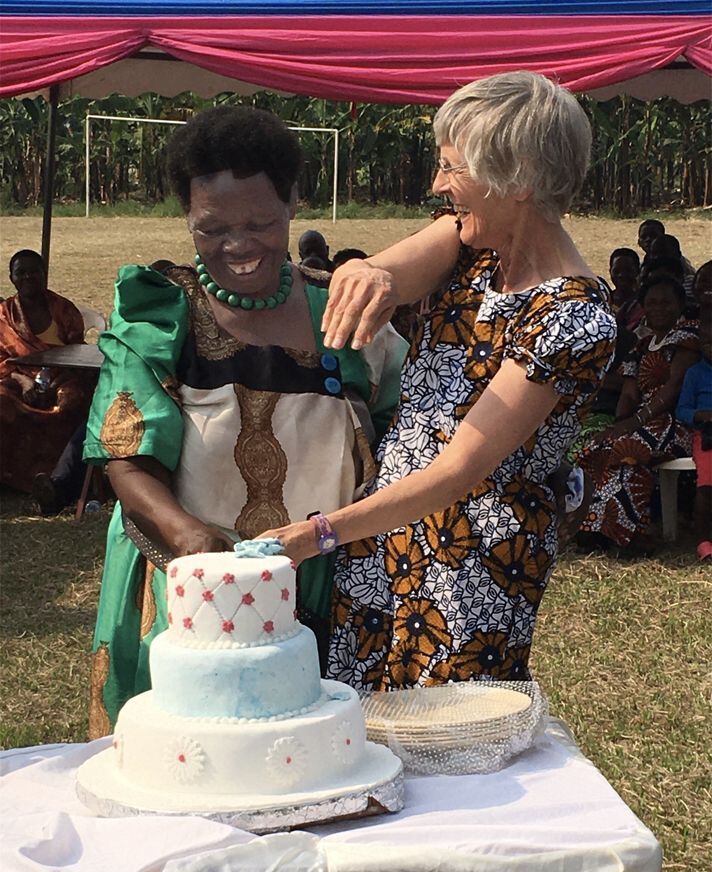 So there was a community party with speeches, and a thanksgiving service — thanking God for His provision over the years, for Dorothy' s willingness to answer His call, and for her tireless work serving motherless and abandoned babies and children in western Uganda.

As Averil's photograph shows, this was a very happy day — and also a very sunny one.

But, in Uganda, even cutting a cake isn't necessarily a piece of cake; and things didn't quite go to plan.

The anniversary cake had been left out in the sun rather too long, turning Royal Icing to rock!

Worse still, the knife wasn' t up to the job — more of a bendy spatula than the super-sharp Sabatier special that was needed.

So Janet and Dorothy could make no impression on the icing.

Fortunately, on this very special day, everyone saw the funny side!

And in the end, they all got their piece of cake.

“Being in the office I saw first-hand the comings and goings and work rate of staff. I was not impressed. A poor work ethic is compounded by poor management and a lack of forward thinking leading to inefficient working. Because many staff live on site it is difficult to know when they start/finish work and how many breaks they have.  … [M]uch tighter management is required.”

Over the preceding months, NOTDEC UK Trustees had become increasingly concerned about management at NOTDEC Uganda and had pressed for changes.  During their visit, Canon Jehoshaphat – Chair of NOTDEC Uganda Trustees – announced that Director Baluku Moses had effectively resigned.  His contract expired in May 2020; and he did not want it renewed.

Like it or not then, “change gonna come”.   NOTDEC Uganda Trustees are now actively looking for a new Director – an upstanding Christian with the strength of character and determination to motivate the staff and take NOTDEC Uganda into the future.

As Averil & Graham found, life in Uganda is not cushy; and – they say – the work ethic is weaker than in Europe.  For many NOTDEC families in the poor west of Uganda, life is downright difficult.  And if their work ethic is not all it might be, that certainly isn’ t the fault of the kids – who still need good food, clean water, decent housing, and love.

Like Averil & Graham, any new Director at NOTDEC will be thrown in at the deep end.  A Ugandan will understand the culture and work ethic, but we’ re unlikely to find anyone who also knows about staff motivation, accounts, bottle-feeding, childcare, education, estate management, farming and vehicle maintenance. A vertiginous learning-curve is inevitable.

The deep end can be uncomfortable.

Please pray that God will lead us to the right individual as NOTDEC’ s next Director – someone willing to listen, able to learn quickly, and capable of taking NOTDEC Uganda forward for the glory of God to do the absolute best for the children.

The views expressed in the extracts quoted above are those of Averil & Graham Ballinger, and are not necessarily shared by NOTDEC UK Trustees.