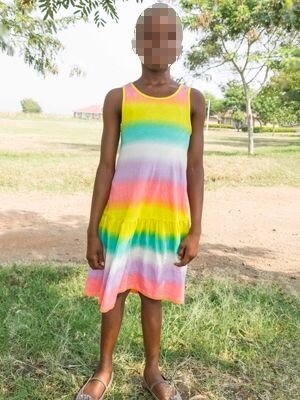 AB was passed to NOTDEC by Kasese Child & Family Protection Unit in February 20XX when she was 7.  Her parents had seemingly died, leaving her to her bedridden grandfather who simply could not look after her properly.

At the time, that was the information given to NOTDEC.  Subsequent investigations have revealed something much closer to the truth.

AB's mother was from a Catholic family, her father a Jehovah’s Witness.

Giving birth to a later sibling, the mother bled profusely and nearly died because her father-in-law forbad a blood transfusion on religious grounds.  When the mother's family found out, they rushed her from the clinic where the sibling had been born to Kilembe hospital for a transfusion.

It played on the mother's mind that AB's father had had lots of children by several different women and had not settled with any of them.   Eventually, she decided to leave, depositing AB with her bed ridden grandfather:  she was no longer willing to live with — and have the babies of — a man whose family would not allow the very blood transfusion that had saved her own life.

After the mother had left, the Family and Child Protection Department visited the family and passed the child to NOTDEC.  The wider family was burdened with looking after the grandfather and many more children that his son had fathered, and they could barely cope with them let alone another child.

Later, AB's paternal grandfather fell ill, sold his land in the village, and proceeded to visit various hospitals seeking advice about treatment. In due course, he was taken to Kagando hospital where his foot was amputated, but he died — largely because of blood loss and his refusal of a blood transfusion.